This research aimed to investigate the quantity of particulate matter and atmospheric dust and the health status of people in two communities in Kumpawapi District, Udon Thani Province. Health data of the residents were collected and interviews were conducted with people in communities. Total Suspended particulate matter (TSP) and suspended particulate matter (PM10) were collected from the sources of air pollution and in the communities around them; average sample collection time was 24 hours. Health data and interviewed results were obtained by personal interview and focus group discussions with representatives from related organizations.
The results showed that the average concentration in 24 hours of TSP and PM10 near source of the air pollution exceeded the value of TSP and PM10 standards while factories were in production, especially in January. The average TSP at this site in January was 387.76±39.2 μg/m³ (rang : 351.3 - 462.6 μg/m³) and the average PM10 was 136.57±9.86 μg/m³ (rang : 123.84 - 149.7 μg/m³). The obtained result showed a higher level of dust near the source. Results from the questionnaire showed that health problems caused by dust or respiratory symptoms presented in 90.5% of residents living close to sources of air pollution. Further study also indicated that the respiratory symtoms in the communities had a significant relationship with the dust concentration (p-value<0.05). The results indicated that those in the communities nearby the sources of air pollution were 5.83 times more prone to develop respiratory problems or showed symtoms of respiratory problems than those in the control community (95%CI = 3.22 – 10.18).The results from the interviews showed that 85.4% of residents indicated that most of the dust was from the nearby industial factory and 11.1% from the open burning in agriculture is the source. This study indicated that the quantity of atmospheric dust, especially PM10, in a community close to a factory exceeded the standard level. It is necessary for related government authorities to create awareness about the problems caused by dust from industrial production and open burning. The relevant companies and agencies should find solutions to prevent and reduce dust pollution in the district of Kumpawapi in the future. 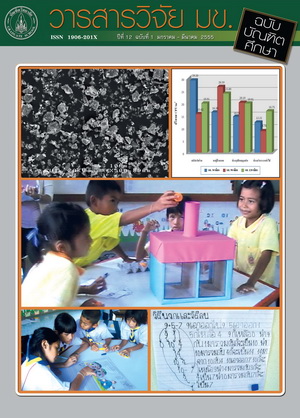