Teak is an example of proxy data that can be used to indirectly deduce past climatic conditions. The objective of this study was to investigate the relationship between teak growth and climate data in western Thailand.  Dendrochronological techniques were used to analyze 52 sample cores from Umphang Wildlife Sanctuary. The crossdated ring width data could be extended back 127 years (1886-2012). The relationship between ring-width index and climatic data indicated a positive correlation (p<0.01) with the current year total rainfall in March and June. Thus, only March and June data were used to reconstruct the annual ring width index which indicated a downward trend in the reconstructed rainfall. Considering the March and June average total rainfall, a wet period occurred in 1887-1895 and this gradually decreased to a stable pattern in 1927-1945 with a further decline to another stable level in 1957-1964. Similarly, the dry periods occurring in 1896-1926, 1946-1955, 1965-1981 and 1982-2012 could explain the high fluctuations in rainfall. Periods of 2.2-2.7 and 25.2 years were found to be common with the variations in the El Niño-Southern Oscillation. In conclusion, teak growth information can be used to monitor global warming events.

Published articles are under the copyright of the Environment and Natural Resources Journal effective when the article is accepted for publication thus granting Environment and Natural Resources Journal all rights for the work so that both parties may be protected from the consequences of unauthorized use. Partially or totally publication of an article elsewhere is possible only after the consent from the editors. 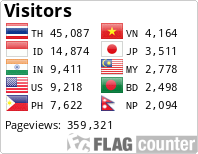